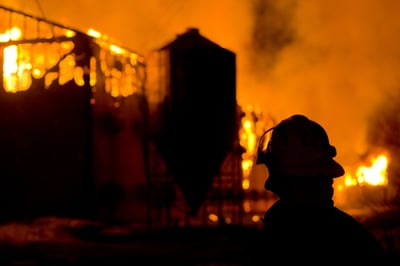 Fire safety is an extremely important subject. Due to the dry climate and extensive grasslands, the Texas Panhandle is prone to wildfires, especially during the dry, windy months of late winter and early spring.

Here are a few tips to help prevent a fire in your barn.

Many barn fires start from overheated hay that's within six weeks of baling. Excess heat is generated during the hay curing process, making the hay more combustible than usual.


Consider the following when storing hay:

Box fans used to cool down animals are the cause of many barn fires. The motors of inexpensive box fans aren't sealed, which allows dust and dirt to get into the motors. As a result, the motors can overheat and ignite a fire. Agricultural and industrial-level fans, which have sealed motors, are much safer for barn use.

Play it safe by prohibiting smoking in and around your barn. A cigarette that's carelessly discarded can ignite hay or dry bedding in a matter of seconds. In fact, careless smoking is one of the leading causes of barn fires.


Electrical wiring should be enclosed in metal or PVC conduit. Disconnect portable appliances (radios, clippers, and extension cords) when not in use. Never leave appliances running when no one is in the barn. Space heaters should only be used according to manufacturer's guidelines and never left unattended.

5. Keep the area outside the barn fire-safe

Fires can start beyond a barn's wall, and it's important to take steps to prevent them from starting. Park gasoline and diesel-powered vehicles away from the barn and never refuel a vehicle near the barn as escaping gasoline vapors can easily ignite.

For some tips on preparing your arena for the next race, check out our free white paper.